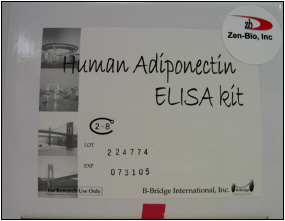 Adipocytes (fat cells) express a variety of proteins that function in the homeostatic control of glucose and lipid metabolism. Insulin regulates the translocation and secretion of many of these proteins in response to changes in energy balance. Adipocyte complement-related protein of 30 kDa (Acrp30), now known as adiponectin, is a protein whose secretion from adipocytes is enhanced by insulin stimulation.

It has been suggested that the development of non-insulin dependent (Type II) diabetes may involve dysregulation of adiponectin secretion (1). In support of the link between obesity and Type II diabetes, it has been shown that decreased expression of adiponectin correlates with insulin resistance (2,3), and that adiponectin appears to be a potent insulin enhancer linking adipose tissue and whole-body glucose metabolism (4).

This human Adiponectin ELISA kit is designed to measure the concentration of human adiponectin from human serum/plasma, human adipocytes, or conditioned medium.

Zen-Bio sells products for research use only. Research products are labeled for Research Use Only and are not for use in diagnostic or therapeutic procedures. Zen-Bio, Inc is not liable for misuse of any product.